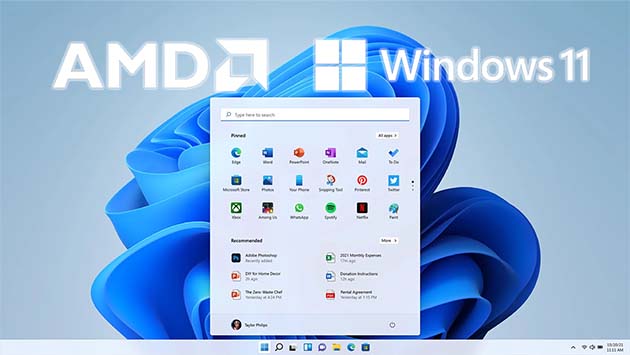 When it comes to Windows 11, it’s possible we’ve just seen another explosive moment. AMD and Microsoft have previously verified that the new operating system increases L3 cache latency on Ryzen CPUs by three times, but independent testing has shown that it may be up to six times slower. Games,
like other high-performance software, may be slowed down by cache delay.

To demonstrate just how messed up Windows 11 is on Ryzen, here are some more impressive statistics. According to Paul Alcorn’s tests at Tom’s Hardware, Windows 10’s L3 cache bandwidth may be up to 12 times quicker than that of Windows 11 when compared.

AMD and Microsoft jointly disclosed an increase in cache latency of three times, which they claimed may decrease gaming performance in lighter esports-style games by 15% on Windows 11. The bad news follows the announcement of that increase. According to the businesses, Windows 11 may slow
down less latency-sensitive apps and games by 3 to 5 percent.

AMD CPUs with eight or more cores performed the worst in the tests conducted by Tom’s Hardware. When using the AIDA tool on Windows 10, Alcorn discovered that the L3 response time of a Ryzen 9 5900X was 10.54 nanoseconds. However, 29.23ns was recorded on the identical machine running
Windows 11. A Ryzen 7 3800X with a 6x increase in latency over Windows 10 was tested by Alcorn. However, the new operating system had no effect on Intel’s much-maligned 11th generation Core i7-11700K.

In addition to Ryzen’s L3 cache performance, Windows 11 has a flaw that fails to detect AMD’s greatest core feature. Having a stuttering debut on AMD’s popular Ryzen platform isn’t good publicity for Microsoft’s new operating system, which is already facing opposition from users of out-of-date
PCs that are unsupported. As a reminder, most PC users should hold off on installing Windows 11 until the bugs are ironed out.

The latest Windows 11 test build 22000.282 was made available to Insider testers on October 15th in the Beta and Release Preview channels by Microsoft. A number of problems have been addressed in this version, including an issue with AMD CPUs and a bug that caused some users to
view the old Windows 10 taskbar instead of the new Windows 11 taskbar.

AMD and Microsoft have admitted that Windows 11 on AMD-powered PCs had performance issues for certain customers. Games were the most hit, although other computationally demanding tasks were also impacted. Both an L3 caching issue and a “preferred” core fault were to blame for the issue, which hampered the way thread scheduling operated on the fastest core of the CPU.

A bug with L3 caching in Windows 11 RTM on AMD Ryzen CPUs has been fixed in build 22000.282, according to the Microsoft release notes. However, the main core of the issue isn’t addressed in the current release.

According to the Microsoft release notes, this version also addresses a bug that prevented certain users from seeing Windows 11’s new centred taskbar design in the final RTM edition.

The changelog for this new version lists many additional fixes. Windows 11 customers with AMD processors should have a patch ready by the end of October, according to Microsoft and AMD.

I switched from iOS to Android